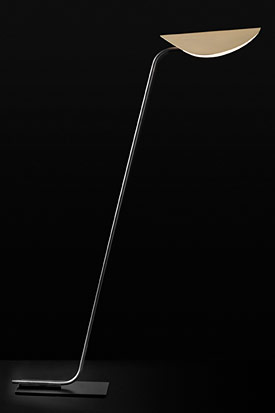 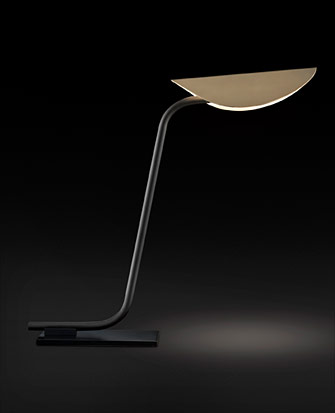 Objects with a clear design look, pieces of furniture with an imposing yet graceful appearance, Oluce‘s products are stunningly able to create a dialogue through styles and generations, merging perfectly with the settings in which they are.

At Euroluce 2017, the company will present itself and its new collection and will arrange a stylish, intimate and cosy mise-en-scène, but also an actual stylistic and temporal narration.

Unveiling its new space inside Pavillion 13, Oluce makes its appearance at Stand C01-C05 with a larger area and an extremely appealing set-up.

The creator of this exhibition space, Ferruccio Laviani outlines a world composed of several settings and precious details, confirming the strong bond with the company that first arose during Euroluce 2015. The stand becomes a micro-architectural space contrasting large surfaces and more intimate, cosier settings. The products and collections define a refined living area, made up of elaborate grandeur, cosy environments and contemporary shapes. The set-up is completed by an area dedicated to Oluce’s Bespoke Tailoring, an extremely flexible customisation service created to meet all contract demands.

The undisputed leading figures on the scene, this year Oluce’s products define an aesthetic, chronological story, developing as a temporal narration which uninterruptedly binds the past, the present and the future. Objects designed by different hands, expressions of different cultures and time periods, associated by the company’s unmistakable style, which will serve as a fil rouge for the whole collection.

Some of Oluce’s icons are also not to be missed, projects signed by big names in the world of design, representing a starting point for the company’s narrative program. Vico Magistretti’s lamp Atollo celebrates its 40th anniversary in 2017, whereas Joe Colombo‘s Coupé ensemble turns 50, proving to be timeless classics once again.

Continuing the narration, the company will present never-before-seen collections and products signed by big names of contemporary design like Christophe Pillet‘s collection Plume, previewed by Oluce.

Plume is an ensemble composed of a table lamp and a floor lamp, two objects with the same shape and proportions but with different sizes. Plume creates the perfect match by combining slim, light shapes, twirls and expressions typical of Art Nouveau, with metal and with the latest LED technologies, imposing itself as a classic, decorative yet highly contemporary collection.

Both models have a rectangular base, with a slim stem ascending from it and bending upwards and with a lampshade on the other end. The latter is composed of a thin metal surface, slightly bending in the middle to symbolically create a feather-shaped element. The finishings chosen for Pillet’s collection – a shiny black base and stem and a golden lampshade – make it look like a decorative piece with an Art Nouveau vibe.

Oluce completes its narration with a look at the future, in fact Euroluce 2017 will serve as the backdrop for a set of new products designed by some promising students at IED (European Design Institute). Taking on their first professional experience, the young designers have collaborated with Oluce to create several lamps revealing their incredible ability to bring new life to traditional shapes with their creativity, turning them into completely new pieces.